Aston Martin Racing driver Alex MacDowall and Beechdean Motorsport remain at the top of the European Le Mans Series LMGTE standings following a rain-hit second round at Imola on Sunday, 15th May, where the squad had to settle for a top five finish on its maiden appearance at the track.

Heading into the second race of the campaign off the back of a magnificent victory at Silverstone Grand Prix Circuit in the UK last month, 25-year-old MacDowall and team-mates Darren Turner and Andrew Howard aimed to retain their place at the head of the standings and did so despite the Italian venue not being suited to the No.99 Aston Martin V8 Vantage GTE.

“We’ve done our worst track this weekend and we’ve still come away leading the championship, so we’re looking strong for the rest of the season”, reflected the Carlisle racer, “It’s been a bit of a frustrating weekend, we could have finished fourth, but we should be stronger again in Austria for the next round – it should suit the Aston more.”

Unlike Silverstone, the layout of Imola and lack of high-speed corners didn’t play to the car’s strengths and qualifying proved to be particularly challenging – the Beechdean trio having to settle for seventh on the grid in LMGTE and a place at the back of the immense 41 car overall grid.

Leaving a huge amount to do in Sunday’s race, Howard took the opening stint of the four-hour contest and remained on track for the first 50 minutes before serving the first driver-change pit stop to hand over the car to MacDowall.

Joining the race seventh in class, the Cumbrian reeled off some excellent lap times and started to carve his way through the order very impressively. Absolutely flying, he steered the Aston Martin into the top four of LMGTE and with just under 90 minutes of the race elapsed MacDowall broke into the class top three.

Pulling well clear of the No.56 AT Racing Ferrari, MacDowall motored into the distance and closed markedly on second in LMGTE before pitting with one hour and 45 minutes gone to hand over the car to Turner. As the first of the LMGTE cars to serve a second stop, Turner rejoined the track back in seventh in class but he quickly moved up the order.

He pitted from fourth in class with 80 minutes of the contest to run, MacDowall getting back into the driving seat, and as the race neared the end of the third hour a Full Course Yellow cautionary period was declared – with MacDowall holding fourth in LMGTE.

Soon after, the complexion of the race changed completely when the onset of rain made track conditions very tricky so the Aston pitted for intermediate Dunlop tyres. No sooner had MacDowall ventured back onto track, though, a torrential downpour saturated the asphalt so he had no option but to pit again for full wet-weather rubber.

Emerging fifth in class, due to the volume of water on the track officials continued the Full Course Yellow period and although the deployment of the actual Safety Car followed with just under half an hour to run, hopes of a re-start didn’t come to fruition and the contest ended behind the Safety Car.

There is now a break of roughly two months from European Le Mans Series action with round three of the season taking place on Sunday, 17th July, at the Red Bull Ring in Austria. 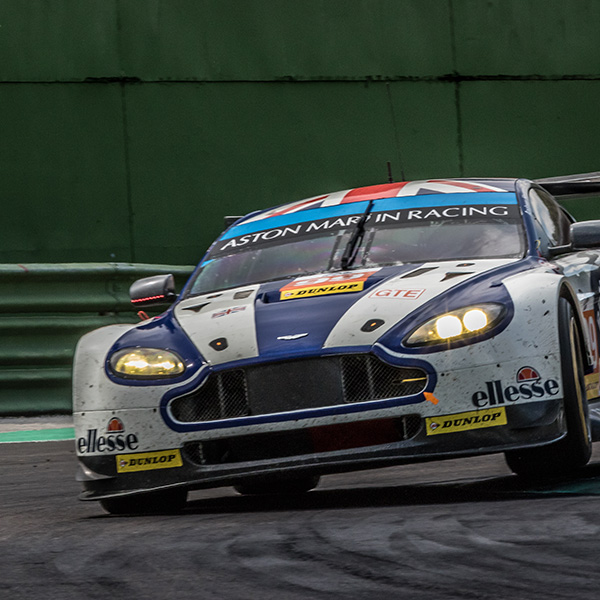