Lapping second fastest in practice on Friday, 26th August, and repeating that performance during the second session on Saturday, 27th August, only a fraction of a second shy of the top of the LMGTE times in each case, the Aston Martin crew went a step better in qualifying at the Le Castellet track.

Turner delivered a best time of 1m56.285 seconds (179.3 km/h) to not only secure pole position for the fourth race of the season, it also marked the maiden LMGTE grid-topping performance in ELMS for the British squad. Additionally, the pole performance also netted the team-mates a crucial bonus point which moved them back into the championship lead at that stage.

Going on to finish third in the four-hour race on Sunday afternoon, second place in class was on the cards until an unfortunate problem with the bonnet catch cost the No.99 Aston Martin V8 Vantage GTE roughly 15 seconds extra in the pits. In the end, only six seconds separated MacDowall at the flag from the second placed Ferrari 458 Italia.

"Starting on pole was nice, but it doesn’t really mean a lot in a four-hour race!", reflected MacDowall, "Andrew did a good job in his stint at the start, then the plan was for me and Darren to run to the end and make up any time. The pace of the car was fantastic, it was in a class of its own really. We were doing 59s at the end of our stints, over a second quicker than the Ferraris.

"It’s obviously great to be on the podium and I’m happy with my two stints, and I set our fastest lap as well – I pushed like crazy in my last stint and did all I could. The problem with the bonnet catch cost us about 15 seconds extra in the pits. Without that we could’ve been second but I’m happy with third and another podium."

Team principal Howard got behind the wheel of the No.99 car for the start of the 4 Hours of Le Castellet and was edged back to fifth position initially. Down to sixth in LMGTE at the first driver change pit-stop, MacDowall then took the second stint and made fantastic progress to work his way into second place by the end of the second hour.

Turner’s run came next at the second stop and the pole qualifier took the Beechdean Motorsport car into the lead of LMGTE before handing the car back to MacDowall for the dash to the chequered flag during the final stages of the race.

Despite the additional 15 seconds lost as a result of the loose bonnet, and some Full Course Yellow cautionary periods which didn’t work in their favour in terms of the stint strategy, the Aston Martin trio celebrated an excellent third place – the second podium finish of 2016.

Round five of the European Le Mans Series will be contested at Spa-Francorchamps in Belgium, over the weekend 24th/25th September, where Cumbrian racer MacDowall is confident the team has a great chance of challenging for victory and closing on the LMGTE points leaders.

"Spa will suit our car, the Aston is always strong there and good with the high speed", he commented, "Estoril [venue for the finale in October] should suit us as well so I think the last two rounds will be good. We just need to focus on what we need to do one race at a time, as soon as you start chasing the championship that’s when things can go wrong." 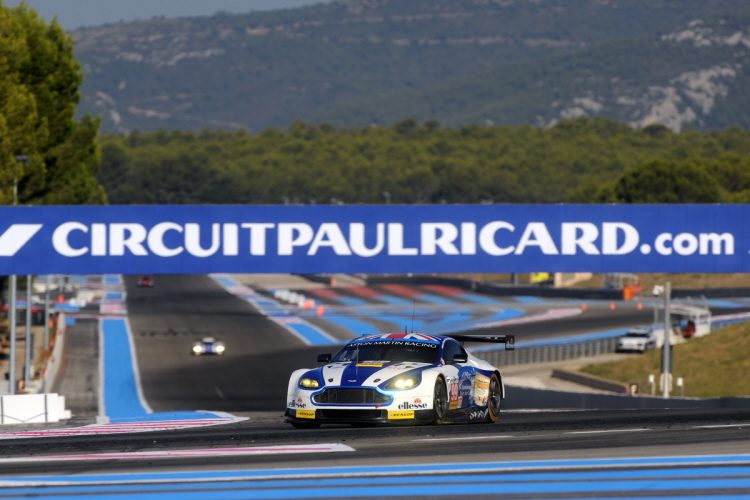