Porsche 911 GT3R racer Alex MacDowall made an excellent start to his maiden season in the ADAC GT Masters at Oschersleben in Germany over the weekend, 29th/30th April, with a fantastic second place finish during round one of the campaign.

Teaming with Austria’s Klaus Bachler as part of the No.36 bigFM Racing Team Schutz Motorsport entry, Carlisle-based MacDowall was delighted to secure silverware in his first ever race at the wheel of a Porsche.

Round two, sadly, wasn’t as favourable when a difficult qualifying session was compounded by an early race incident which required avoiding action from MacDowall. With no option but to take a trip through the gravel to avoid contact, good early progress from the Cumbrian driver was undone through no fault of his own – resulting in an eventual 14th place finish for the team-mates.

“It’s good to come away from the first weekend with a podium”, said the reigning European Le Mans Series LMGTE Champion, “The Porsche is completely different to the Aston Martin I raced last year, you have to think a lot about every lap in the Porsche but I spent some time studying video of Klaus to learn as much as possible. Overall, it’s been a decent weekend and I’m fairly happy.”

Bachler got the weekend off to a great start when he set the fastest time in pre-event practice, before qualifying a mere 0.065 seconds shy of pole position for the opening race. Taking the first stint of round one, he immediately moved into the lead at the rolling start and pulled out a gap of 2.5 seconds on lap one. The appearance of the Safety Car on lap three, though, undid his work.

Racing resumed on lap five but the next time around the Safety Car was required again with the action under caution until lap 10. When the pit-window opened at the 25-minute mark he remained on track and pitted a lap later than the pursuing No.17 Porsche of Mathieu Jaminet.

Handing over to MacDowall at the end of lap 18, all looked good for the team to retain the lead but an unfortunate stall cost vital seconds. Firing the car back up, the British racer emerged on track in second place with a pair of battling Audis in close company just behind. MacDowall managed to see them off into the final quarter of an hour and he pegged the gap to the leader at five seconds.

Holding a comfortable second place with five minutes to go, the Safety Car was required for a third time which bunched the pack up for a final, last lap dash to the flag. With a backmarker between race leader Michael Ammermuller and MacDowall, the series rookie wasn’t able to try and attack for first place when the cars were unleashed and ended the race just 0.7 seconds shy of the win.

Carrying success ballast for Sunday morning’s qualifying session, championship organisers also made an overnight change to the ‘Balance of Performance’ which resulted in the Porsche entries carrying significant additional weight for day two.

MacDowall qualified 18th fastest for round two and aimed to make up a lot of early ground. Doing precisely that, he gained several places through the first half of the lap before an incident ahead led to him taking swift avoidance and a trip through the gravel trap.

Recovering down in 27th position, MacDowall moved back through to 24th place before the Safety Car was deployed on lap four. After the resumption on lap seven he soon became bottled up behind the Nissan of Patrick Huisman which, in turn, was on the tail of Christopher Hoher’s Audi.

Glued to the back of Huisman lap after lap, MacDowall searched for a way past but was frustratingly stuck behind the Nissan. Pitting as soon as the driver-change window opened at the 25-minute mark, Bachler was 22nd when the race order settled and after two more Safety Car periods he eventually ended the race in 14th position.

“We had to carry a lot of weight for second qualifying on Sunday and race two which made things difficult, I had to learn how to drive round that”, explained MacDowall, “The race started OK but then I had to avoid the collision in front, I think going through the gravel must have damaged the car in some way as it was a struggle after that.

“Klaus was quick all weekend and to start the first race from the front row was good. He had a great start, took the lead and everything went well up to the pit-stop. Unfortunately, the stall cost us around seven seconds which gave the other Porsche the lead but second was still a good result and I’m pretty happy with my performance. It’s a positive start to our championship.”

Next stop on the ADAC GT Masters calendar is a visit to Lausitzring in Germany over the weekend 20th/21st May. 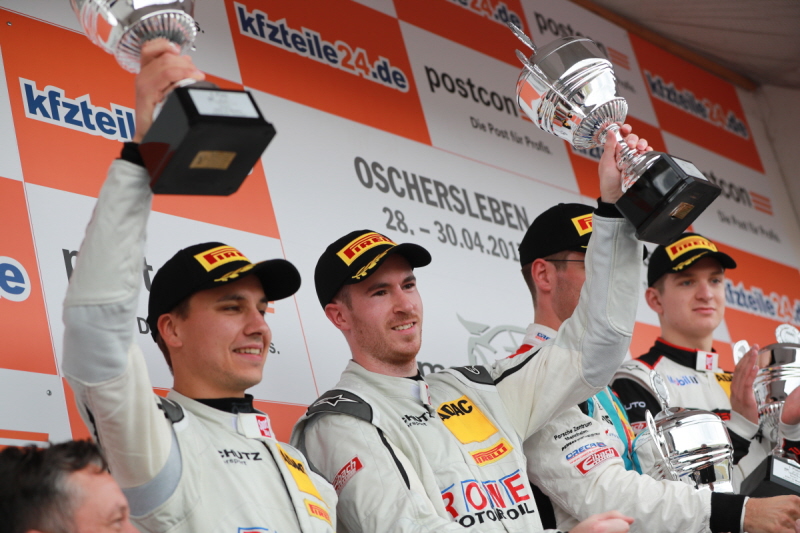