Alex MacDowall experienced a tougher than anticipated second event of the ADAC GT Masters series at the Lausitzring in Germany over the weekend, 20th/21st May, when race one contact and power steering issues in second qualifying limited the Briton to a best result of 13th place.

Having begun his maiden season in the championship with a podium at Oscherleben at the end of April, MacDowall hoped to be in the mix once again on his first visit to the Lausitzring but a series of difficulties led to a challenging event for the Carlisle racer and team-mate Klaus Bachler.

Despite a clean start from Bachler to round three on Saturday, the Austrian was collected at Turn Three on the opening lap and the resulting damage to the bigFM Racing Team Schutz Motorsport Porsche led to instant retirement.

With power steering issues, a legacy of the incident, preventing MacDowall from setting a lap time in the race two qualifying session on Sunday morning, the British driver had to start round four from the back of the grid but he and Bachler managed to end the contest in a much improved 13th place.

“We’ve had a bit of bad luck this weekend”, said MacDowall, “We didn’t really have the performance in first qualifying and so Klaus started the first race in amongst the pack in P10, then an Audi decided to lunge him – the way the steering was turned it broke the chassis on the front-left. Unfortunately, after the repairs, the power steering wasn’t sorted for second qualifying so I didn’t turn a lap.

“It was tough to make up places from the back but P27 to P13 wasn’t a bad result, just not the sort of result we’re out there fighting for. In testing this weekend I was only two tenths off Klaus, so I feel I’m starting to gel with the Porsche more and getting quicker. It’s just a shame we couldn’t turn that into results.”

Bachler qualified the Porsche 911 GT3R for race one but a good start from 10th on the grid came to nothing only three corners into the contest when an Audi hit the No.36 car on the inside, pitching the Porsche into a second Audi on the outside – triggering retirement for both.

With MacDowall prevented from setting a lap time in round four qualifying, the British driver had to start race two on Sunday from 27th on the grid. Staying out of trouble into the left-right first corner, the Cumbrian moved up into 26th place before the Safety Car was deployed for lap two.

Racing resumed a lap later and although MacDowall was edged back a place he soon hit back, settling into a rhythm after passing the Audi of Marc Busch. Moving into 25th with 10 minutes gone, he gained two more places before pitting around the 25-minute mark to hand over to Bachler.

Into the final half hour, the No.36 Porsche held 22nd place but a variety of incidents and errors from other drivers aided Bachler’s rise through the order and he was able to make headway. With 10 minutes to go he held 16th position and after breaking into the top 15, Bachler made up two more positions before the conclusion to finish in 13th spot.

All attention now turns to rounds five and six of the ADAC GT Masters which will take place at the Red Bull Ring in Austria over the weekend 10th/11th June, a venue where MacDowall almost finished on the podium in the European Le Mans Series last year.

“I’m looking forward to the Red Bull Ring next, Klaus and I both know the track and it’s the first circuit on the calendar I’ve been to before”, added MacDowall, “We need to go for maximum attack from now on, there’s nothing for us to lose after this weekend and especially in such a tough and hard-fought championship. We’ll keep chipping away and hopefully fight for the podium in Austria.” 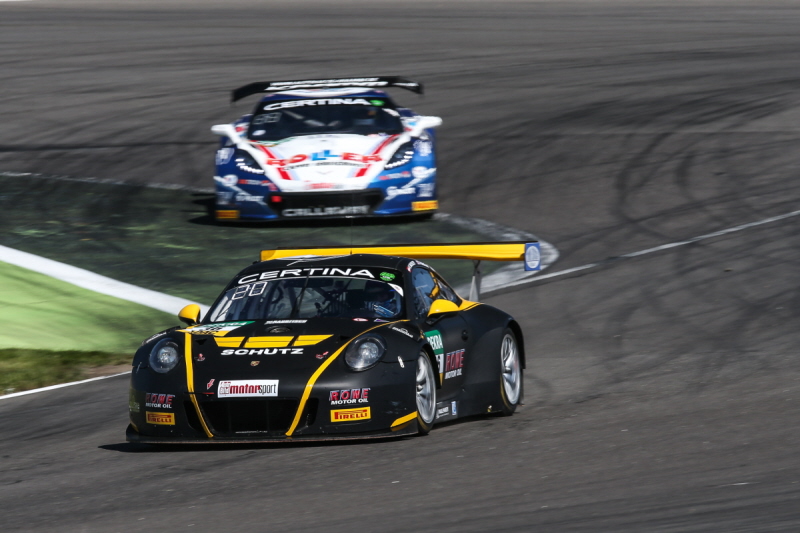