Hockenheim in Germany hosted the conclusion of the ADAC GT Masters season over the weekend, 23rd/24th September, where Alex MacDowall ended his maiden campaign in the category with yet more frustration.

Off the back of a strong top seven result at the Sachsenring last weekend, the Carlisle driver and team-mate Klaus Bachler hoped to end the season with a bid to be the highest placed Porsche entry in the final two races but it wasn’t to be after two very challenging encounters.

Both drivers struggled with handling issues aboard the No.36 Porsche 911 GT3R throughout the event, bringing a disappointing end to what has undoubtedly been a character building year for 2016 European Le Mans Series LMGTE Champion MacDowall.

“The car wasn’t good at all this weekend, it just wouldn’t handle”, explained MacDowall, “You couldn’t turn in to the corners, couldn’t put the power down, it was a nightmare really and Klaus was just as frustrated as I was.

“In the first race Klaus was doing a good job, but he was having to work so hard to keep cars behind him and after some contact it knocked the tow out on the car. After he was pushed wide, he just came into the pits to park the car. Then, in race two, I wasn’t happy at all with the car and just wanted my stint to end to be honest.”

He added: “It’s been a really frustrating season, but I have learned from it and I’ve definitely learned a few tricks which a car like the Porsche teaches you. It’s a very demanding car, notoriously difficult to drive, but that has made me think more as a driver and it should stand us in good stead for whatever we do next year – full focus is on that now.”

Qualifying for round 13 proved to be very close, Bachler securing the ninth fastest time within just 0.8 seconds of pole position. Taking the opening stint of Saturday’s contest , the Austrian made a great launch and climbed into eighth out of Turn Two before fortunately emerging unscathed when a Lamborghini got out of shape behind and almost tagged the Porsche.

As the incident for the Lamborghini triggered a multi-car tangle, several cars ended up stranded on track and officials had no option but to red flag proceedings. Competitors, therefore, returned to the grid in readiness for the re-start where Bachler would again line-up in ninth spot.

Racing resumed behind the Safety Car and when the action proper got underway with around 53 minutes to go, Bachler maintained position. Coming under increasing pressure, the bigFM Racing Team Schutz Motorsport driver was then edged back to 10th place with just under 40 minutes to go.

With the increasingly difficult handling becoming a major headache, Bachler quickly became a sitting target and contact from a rival while defending forced him off the circuit at the final corner – leading to retirement to the pits.

MacDowall started round 14 on Sunday 20th on the grid, second qualifying having again been incredibly tight with the Cumbrian lapping only 0.7 seconds shy of the top six. Making a good start to the race, MacDowall received a slight nudge at the hairpin but continued without too much drama although he did slip to 21st place.

Regaining 20th position on lap two, MacDowall was in the thick of some very tight battling with positions switching back and forth. Inside the top 20 with 15 minutes of racing complete, he then dropped to 23rd place after receiving a heavy whack to the right-rear of his Porsche from the No.20 Mercedes at the hairpin – indicative of the way the 2017 season has gone for the British racer.

After the mid-race driver change pit-stop Bachler managed to work his way through from outside the top 20 into an eventual finish of 19th place, bringing the curtain down on a character-building season for the otherwise rapid and talented duo. 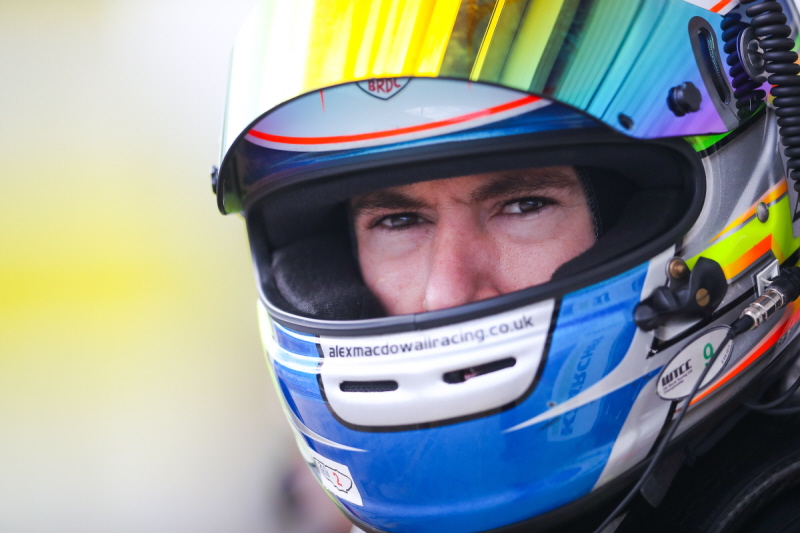