Having put together a truly fantastic race in the No.66 Ferrari F488 LMGTE during round four of the season, the JMW Motorsport trio’s bid for class victory did look to have been ended by a 10 second penalty linked to a track limits infringement late in the race.

During the pulsating closing stages, though, Spanish driver Molina managed to overturn the penalty and at the chequered flag he had done enough to claim the squad’s second victory of the season by a miniscule 0.126 seconds. Having started the Silverstone GP weekend sixth in the LMGTE standings, the JMW drivers have leapt back up into second place – only nine points shy of the series lead.

“We seem to like these last lap wins!”, said an elated MacDowall, the team having also taken victory in the opening race of the year at Paul Ricard in France on the final lap, “With the 10 second penalty, Miguel had to try and keep the gap to [Matteo] Cairoli in the Porsche, but it was about eight or nine seconds so we thought there was no chance of the win.

“Somehow, though, he managed to just do it by 0.1 seconds. It’s obviously fantastic to win again and we’re not far off the championship lead now, just nine points, so it’s back alive again for us. It was a shame about the DNF at the Red Bull Ring during the previous round, but that can happen to anyone and we’ve shown this weekend we’re back in the fight. We just need to take each race as it comes.”

Molina qualified the No.66 Ferrari fourth fastest on Saturday morning, just a couple of tenths of a second shy of the LMGTE pole position, and Griffin took the first stint of the four-hour race later in the afternoon. Becoming embroiled in a titanic back and forth battle over third with the similar Spirit of Race Ferrari F488, the JMW driver then moved up into second before making the first pit-stop.

With 70 minutes of action elapsed, he handed over to MacDowall who joined the race while it was under a Full Course Yellow cautionary period. Holding third position when racing resumed, the Cumbrian maintained the LMGTE podium placing and set about absolutely decimating the advantage held by the second placed No.55 Spirit of Race car.

Starring with a superb stint, closing a gap of around 16 seconds, MacDowall pressed on and climbed into second position midway through the third hour. Griffin then returned to the car for a second stint, in which he moved up into the class lead before slipping back behind the No.55 Ferrari and also the No.88 Porsche.

With a monumental podium battle developing, just 1.5 seconds covering the top three as the final hour of racing approached, Molina then got behind the wheel of the JMW car for his stint and thanks to a terrific turn-around by the pit-crew he was able to gain 12 seconds on the Porsche.

Running in second place, the news then filtered through the JMW entry was to be given a 10 second penalty for an earlier track limits indiscretion. Additionally, the Spirit of Race Ferrari also had the same penalty applied and so the frenzied fight to the finish began.

Molina managed to take the lead of LMGTE on the track, and then had to try and pull 10 seconds clear of the penalty-free Porsche. Into the final lap of an incredible race, nobody could tell if the Spaniard had managed to achieve the unthinkable but at the finish he was 0.126 clear after superbly overturning the deficit.

“It really was a fantastic race”, reflected MacDowall, “I was really happy with my stint, I took about 15 or 16 seconds out of Aaron Scott in the Spirit of Race Ferrari which really helped us later in the race, and obviously made the win possible in the end.

“The car was too stiff at the start of the weekend, so we were on the back foot really at that point, but we did a lot of work through practice and qualifying and by the time we got to the race the car was how we wanted it – the team did a fantastic job. I’m pleased we showed our true potential.”

Round five of the 2018 European Le Mans Series campaign, the penultimate race of the season, will take place over the weekend 22nd/23rd September at Spa-Francorchamps in Belgium. 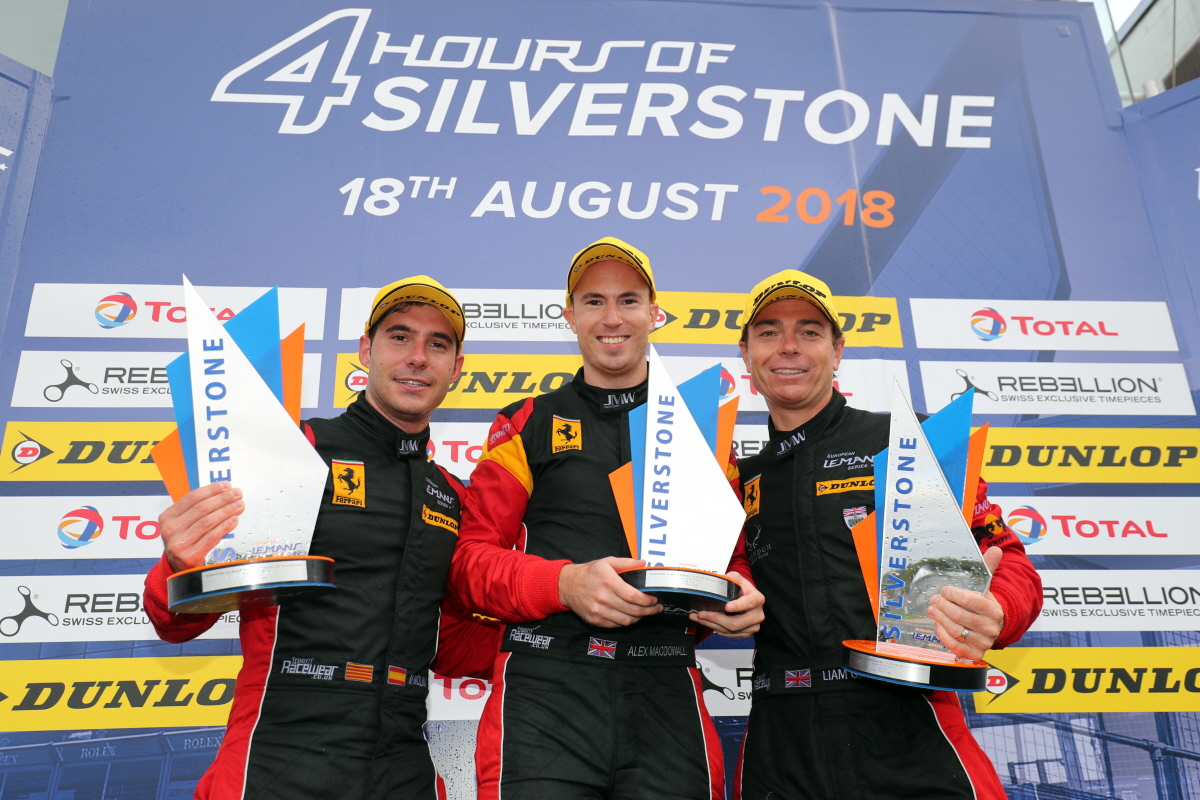