Alex MacDowall celebrated his second Silver Cup podium finish in as many GT World Challenge Europe Endurance Cup races during round two of the season at Germany’s Nurburgring on Sunday, 6th September, with a hard-earned second place in the action-packed six-hour encounter.

Following on from his winning start to the rescheduled 2020 campaign with Barwell Motorsport team-mates Frederik Schandorff and Patrick Kujala last time out at Imola in Italy, Carlisle driver MacDowall is now second in the Silver Cup championship and just a single point shy of the lead.

Everything started perfectly for the Lamborghini Huracan GT3 EVO trio with pole position in qualifying on Saturday, 5th September, but for almost five hours of the endurance encounter they had to contend with an engine issue which cost at least 10 km/h in a straight line. To only miss out on the class win by 0.2 seconds shows just how competitive the weekend was for the No.78 entry.

“Fred [Schandorff] did really well at the start, up from 17th into fourth overall, but an engine issue started to develop in the second half of his first stint”, explained MacDowall, “We think we were running on one less cylinder, at the first stop the team plugged the laptop in to see what was wrong but it couldn’t be resolved so we suffered with the issue for almost the whole race.

“We had the pace to easily win this weekend, we were losing about 0.7 seconds a lap and still only just missed out on the win by two tenths. It’s good to finish second, and I’m just glad the problem happened this weekend and not at Spa for the 24 Hours. We all drove really well and I think we could have been on the overall podium – we had the pace for sure. I’m motivated for Spa now.”

Progressing steadily through practice and pre-qualifying, confidence was high of a strong run during final qualifying and Schandorff took the first of the three sessions in which he was third fastest in Silver with a time of 1m55.737 seconds.

In session two, MacDowall was an improved second in class with a time of 1m55.558 seconds and Kujala starred in the third run with a quickest lap of 1m54.745 seconds – second quickest in Silver and in the top 12 overall. Taking the combined average of all three sessions, the No.78 Lamborghini qualified on the class pole position and 17th overall on the grid.

Danish racer Schandorff made a sensational start to the race, avoiding a tangle into Turn One and emerging still in the lead of Silver but also a remarkable fifth overall. After an enforced Safety Car period, Schandorff had moved into fourth overall due to another car pitting.

Half an hour into the race, the Dane had latched on to the battle over the outright podium and an entertaining scrap ensued. Just 0.3 seconds adrift on lap 23, Schandorff then started to come under pressure during the second half hour when the Huracan started to lose straight-line performance and was shuffled back to ninth before the first round of pit-stops.

MacDowall got behind the wheel for the second hour and he joined the race still leading the class in 13th overall, but with the Lexus of fellow Silver Cup runner Aurelien Panis right on his tail. Driving well to keep Panis at arm’s length, the battle commanded the focus of the live streamed coverage.

On lap 48, though, a spanner was thrown in the works. At the pit-stop MacDowall’s ship-to-shore radio hadn’t been plugged in and when a Full Course Yellow period was called and then cancelled, he didn’t receive the message. Seeing ‘FCY’ flash up on the dashboard, he dropped his speed and the next thing he knew the race had gone green again as two rivals swept past.

Not long before the two-hour mark, MacDowall pitted and remained in the car for a double-stint and emerged in eighth in class and 28th overall. When the pit-stops had shaken out, the Cumbrian driver held third in Silver and 19th overall and he remained there to the next pit-stop which was taken under Full Course Yellow conditions around 15 minutes before the halfway point of the race.

“It was a real shame the radio didn’t get plugged in at the first pit-stop”, explained MacDowall, “I didn’t get the message from the team and when I saw FCY on the read-out I slowed my speed, but all of a sudden it went green on the display and two cars went by. I worked to try and get it plugged in over the next couple of laps, which wasn’t easy where it’s positioned, but managed it in the end.”

Schandorff returned to the driving seat for his second stint and was second in Silver and 17th overall when racing resumed. Climbing into the overall top 15, still second in class, he then stopped with around two hours and 10 minutes remaining and Kujala climbed behind the wheel.

Holding third in Silver and 18th overall just before the four-hour mark, the Finn embarked on a double stint and before long he had moved up into second in class and the outright top 15. Making a final stop before the end of hour five, when the order settled Kujala had maintained his placings.

With 45 minutes to go he was just over three seconds shy of Silver leader James Pull, and edging ever closer. Into the final half hour just 0.6 seconds separated them and Kujala ultimately crossed the line on lap 173 just 0.2 seconds adrift – despite the engine woes.

Spa-Francorchamps in Belgium hosts the biggest race of the season next, the Total 24 Hours of Spa, over the weekend 24th/25th October. Due to its rescheduled calendar slot, this year’s event will actually take place over an extended 25 hours as it coincides with the clocks being changed. 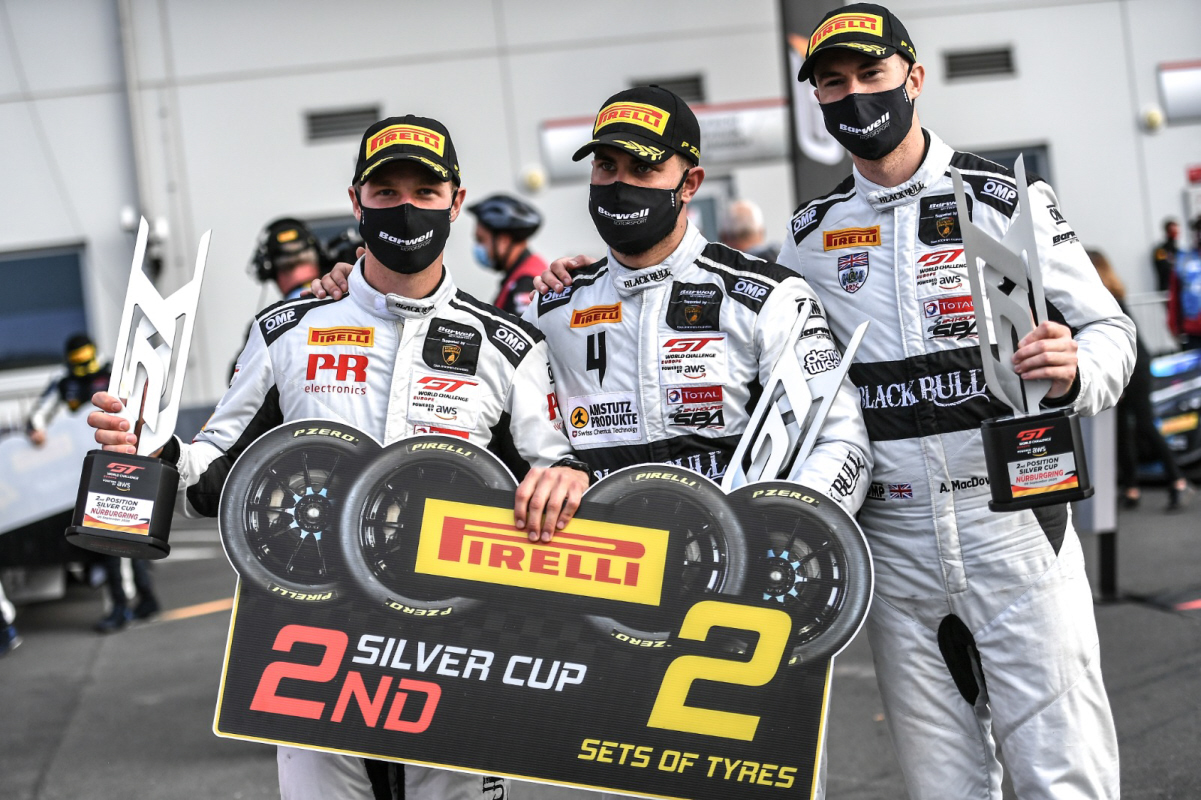